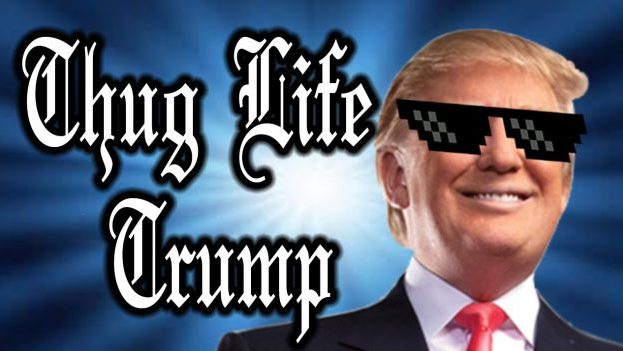 The Candidate From The Internet

Trump’s entrance onto the political scene in 2015 was a watershed in that the traditional metrics and punditry that had worked so well in previous elections failed spectacularly to understand his popularity over the course of the next 18 months.

Much like Ron Paul in 2008, Trump was “the candidate from the Internet”: he activated a base that was increasingly getting news from social media and not network or cable television. He simultaneously developed a cult following among younger and more activist men and women who liked Trump precisely for his combative personality and because he waged war against the Republican establishment. This was the “Alt-Right,” in its broader and more nebulous form, which, from the outset, was demeaned by the mainstream media, variously, as a gaggle of “White supremacists,” “Internet trolls,” and even “ bots.” 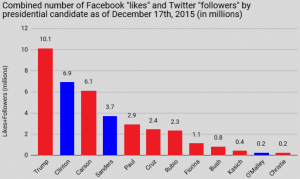 At the time these data were gathered, Nate Silver of FiveThirtyEight infamously wrote “Dear Media, Stop Freaking Out About Donald Trump’s Polls”:

For my money, that adds up to Trump’s chances being higher than 0 but (considerably) less than 20 percent. Your mileage may vary. But you probably shouldn’t rely solely on the polls to make your case

Over the course of the nominating process, Silver and other psephologists assured the public that Trump was an electoral sideshow. Plugging historical precinct figures, campaign finance data, and political endorsements into their algorithms put Trump at the bottom of the pack. Jeb Bush was to be the likely nominee, with Marco Rubio as the possible upset candidate.

A Trump supporter might, on two days notice, take off work to drive three hours for a chance to get inside a sports stadium for a Trump rally—and face a very real chance of being kept outside on account of the venue reaching maximum capacity.

Jeb Bush, on the other hand, had difficulty filling up an elementary school classroom, not to mention getting people to clap.

Yet this patent disparity in intensity was thought by the putative experts to be electorally insignificant.

When a state politician endorsed a candidate other than Trump ahead of a caucus or primary, tens of thousands of people would hear about it—most often, days afterwards through secondhand media reports. During the interim, tens of millions of people would hear directly and instantaneously from Trump via social media platforms like Facebook and Twitter. It was not uncommon for people to be made aware of the endorsements of Trump’s opponents from Trump himself. The conventional blessing of the political endorsement had become the curse of “the swamp.”

Why would anybody listen to @MittRomney? He lost an election that should have easily been won against Obama. By the way,so did John McCain!

Conventional politicians (who are all egomaniacal narcissist to some degree) will invariably deliver campaigns lines like, “This election is about you!” or “I’ll stand for our values!” Trump said something different: “This is a movement.”

Specifics weren’t forthcoming, but Trump promised something new: neither Left nor Right, and perhaps integrating components from both . . . not fixed on a single region or class . . . never beholden to the Establishment or political correctness. Knowing the ethnic composition of a typical Trump rally, the liberal media could be forgiven for labeling this movement “White nationalism”—even if it was always an unconscious expression of that idea.

Were the Polls Really All Wrong?

Looking at the Democrats’ wide lead over Republicans on the generic ballot leading up to the Midterms, many conservative commentators assured themselves that “In 2016, all the polls were wrong.” But was that really true?

The national popular vote total was actually well within the range of major polling predictions. The Real Clear Politics’ average across 11 different polling companies showed Hillary Clinton winning the popular vote by 3.3 points, while her actual margin of victory was 2.1 points. Most of the national polls were within the margin of error.

The breakdown in polling reliability relative to the 2012 presidential election occurred at the state level. Red states went redder than the polls predicted they would and, to a lesser extent, Blue states went bluer. The correlation between Trump’s margin of victory and his over-performance relative to RCP polling at the state level was a staggering .63 (p-value = 0.0000002). 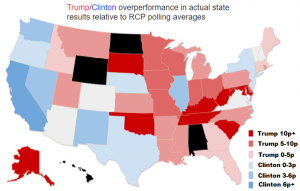 There are now two Americas inside the borders of the United States. Indeed, statistically, the country is even more polarized than the mainstream media would have you believe. Antagonisms are hardening. Terms like “secession” and “civil war” are in the air. A rolling Reuters-Ipsos poll conducted from November 2016 through January 2017 found 22 percent of respondents supporting the state they live in “withdrawing from the USA and the federal government.” Support among non-Whites was even higher, at 29 percent, with less than an outright majority opposed, at 47 percent, and the remaining 24 percent unsure.

The question in 2018—and 2020—is whether the Trump phenomenon is actually a “movement” or a just a “moment.” Will Trumpism as an ideology fade, or be swallowed up by conventional Republican ideas? Or did he inaugurate a new kind of politics on the American Right?

Time will tell. But a soft landing is increasingly unlikely.

96 thoughts on “The Candidate From The Internet”