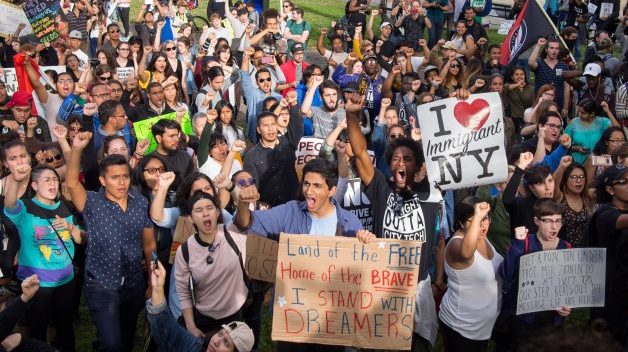 Trump’s victory and inauguration was a winter of discontent for the Democrats and American Left: scenes of crying, shock, hysteria, wailing, and gnashing of teeth filled the news outlets and social media feeds across the country.

But perhaps they shouldn’t have been so angry and depressed.

In 2016, Hillary Clinton received almost three million more votes than Trump (roughly 65.8 million to 63), and many forget that Democrats actually gained seats in the House and Senate. Since 1992, Democrats have won the popular vote in six of the last seven presidential elections. Both Donald Trump and George W. Bush relied on the Electoral College (and the Supreme Court in the latter’s case) to secure their first terms.

That said, who actually votes for Democrats has changed dramatically over the past quarter century. In this way, the 1990s—a “forgotten decade” culturally and socially—was decisive.

When Bill Clinton was elected in 1992, 59 percent of the Democratic voting base was made up of non-Hispanic Whites (hereafter “Whites”) without a college degree, according to Pew research. This number is unsurprising, as the voting population was 85 percent White, and the Democratic Party billed itself as the home of working people. Black Americans were a reliable block, but the Democrats could only win as a White party.

By 2016, working-class Whites had switched allegiances. In Trump’s America, Whites without a college degree make up 58 percent of Republican voters, but only 39 percent of the Democratic electorate. It’s noteworthy that in 1992 Clinton carried his home state of Arkansas, as well as Louisiana, Kentucky, and Tennessee—states no Democratic President could imagine winning in the 2000s.

In 1980, Ronald Reagan won the popular tally by over 8 million votes; Donald Trump, as mentioned, lost it by 3 million. Yet the Gipper performed marginally worse among Whites than did Trump. The difference between Reagan’s landslide and Trump’s nail-biter is attributable to the rapid growth in the size of the non-White vote, which comprised 12 percent of all ballots cast in 1980 and 29 percent of all ballots in 2016. NPI’s research suggests that

In 2002, John Judis and Ruy Teixeira published The Emerging Democratic Majority1 in the lead-up to the Midterms of that year. The book quickly became famous—and by the mid-2000s, infamous for being wrong. At that time, the Bush administration was riding high and mobilizing its base with “hot button” social issues. The liberal books that defined that era had titles like American Fascism and American Theocracy.

Judis and Teixeira’s book remains quite valuable in its way. Its fault lies in the fact that its authors spent too much time looking back to the 1990s, as opposed to the emerging post-White America of the 21st century. For Judis and Teixeira, the Democrats would become dominate through “centrism,” an ideology of having one’s cake and eating it, too, in a post-industrial environment. The (sub)urban White “centrist” wanted a strong, globalized economy, but one in which the existing welfare apparatus was safe-guarded. He was turned off by the Religious Right and Goldwater-esque libertarianism, but equally so by social “progressives” and the anti-American Left. These were the people who voted for Ross Perot and Bill Clinton in the 1990s and, as Judis and Teixeira imagined it, would form the base of the Democratic Party for the next three decades.

The “centrists” Judis and Teixeira describe certainly exist, and many of them vote Democratic.2 But “centrism” as an agenda and rhetorical strategy simply has no future in the Democratic Party. Indeed, one of the Democrats’ most successful templates—running a “centrist” who avoids discussing immigration but works to expand it once in power—faces increasing challenges from within the party itself.

During the 2008 Democratic primaries, “centrist” Hillary Clinton beat Barack Obama among Whites and Hispanics. Obama clobbered her among Blacks, however, and went on to win the nomination.

Many forget that in 2008, the Clintons were accused of “racism”—first in South Carolina, when Bill stated the patently obvious, that Barack Obama energized the Black vote, like Jesse Jackson in 1984 and ’88—next when Hillary boasted of her support among “working, hard-working Americans, white Americans.”

Clinton learned a hard lesson from her failed 2008 campaign: securing Black support is key to winning the Democratic nomination and explicit or implicit outreach to “hard-working” Whites is simply verboten. In 2016, Hillary retained Hispanics from 2008 and narrowly conceded Whites to Bernie Sanders. She comfortably received the nomination from Black Democratic primary voters, winning them by a 4-to-1 margin over Sanders.

At the beginning of the 115th Congress, nearly half of all elected Democrats were White men, even though they comprise less than one-quarter of the Democratic electorate. Declines in the proportions of both the Democratic electorate and the Democratic leadership that are White are likely to continue apace. In the Democratic primary for New York’s 14th congressional district, Puerto Rican Alexandria Ocasio-Cortez soundly beat 10-term White congressman Joe Crowley. In Massachusetts’s 7th district, Black Ayanna Presley beat another 10-term White congressman, Michael Capuano. There are no corresponding victories of upstart Whites against sitting non-White incumbents. If a typical Trump rally might remind you of America in 1950, the Democratic Party gives you a vision of 2050.

Corresponding to that demographic change is a change in political orientation. A YouGov survey from October 2017 found that a majority of those in the U.S. with a favorable view of communism are non-White. As the Democratic party changes demographically it will correspondingly shift towards a politics that is socialist, even communist.

In this transitional moment, the Democrats can be divided up into three broad groupings:

Many candidates are standard bearers of these factors; highly successful ones can represent two of them; combining all three in one person seems impossible. Barack Obama embodied the “Coalition of the Ascendant” but then governed as a Centrist. Alexandria Ocasio-Cortez, the rising star in New York’s 14th Congressional District, is Puerto Rican by ancestry and her advocacy of Bernie-style “democratic socialism” has alienated the leadership of the Party.

How this intra-party struggle will shake out is unclear. Our guess is that the idealistic Bernie Bros will be marginalized by the brute force of the “Coalition of the Ascendant” and “Centrists” in charge of the Party. What is clear is that none of these groupings would dare challenge mass immigration and America’s demographic future. The days when Sen. Bernie Sanders referred to open borders as a “Koch Brothers conspiracy” to lower wages (that is, a policy of Republican fat cats) is over.

The future of the Democratic party is indelibly linked to a post-White America.