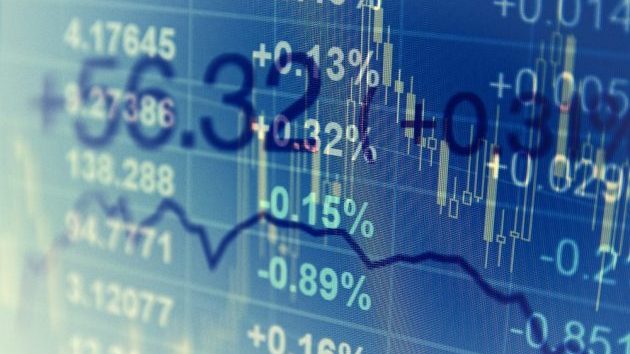 In his rallies across the country, President Trump has sounded notes of both urgency and optimism about the Midterms. He’s predicted that the coming “wave” will be Red, not Blue.

In June, Trump announced Twitter that he has put immigration reform on hold until 2019, when, he suggests, the House and Senate will be packed with more Republicans.

Republicans should stop wasting their time on Immigration until after we elect more Senators and Congressmen/women in November. Dems are just playing games, have no intention of doing anything to solves this decades old problem. We can pass great legislation after the Red Wave!

Unfortunately for Trump, he has reason to worry. Putting fundamentals aside, there is a cyclical logic to the Midterms that favors Democrats.

Over the past three presidencies, the party that holds the White House has suffered setbacks in the Midterms, with the first term being particular vulnerable. The “Red Era” of recent history began in 1994, with the Republican sweep of Congress after Bill Clinton’s first two years in office. Sixteen years later, Republicans took back the House, again in the midpoint of Barack Obama first term. George W. Bush was spared a reversal during his first term, only to have his party wiped out in 2006 at the mid-point of his second administration. One could chalk this pattern up to “buyers remorse” or a “hangover” after an emotional win of the White House, as well as to a natural conservative tendency to “reset” the equation after a party gains power.

The “ragin’ cajun” political strategist James Carville famously coined the phrase “the economy, stupid” as short-hand for Bill Clinton’s strategy in the 1992 election. At the time, George H. W. Bush was thought to be invincible, particularly coming off his successful military intervention in Iraq. But Carville recognized that all politics is local and that voters would be persuaded by the promises of a “change” in their economic fortunes. And for the past few years, the economy had been widely viewed as being in recession—“Morning in American” no more.

Donald Trump has taken a page out of Carville’s playbook in many of his tweets on the Midterms.

Best Jobs Numbers in the history of our great Country! Many other things likewise. So why wouldn’t we win the Midterms? Dems can never do even nearly as well! Think of what will happen to your now beautiful 401-k’s!

An examination of the American economy in detail is beyond the scope of this essay. There are two basic assumptions, however, that are indisputable and inform our analysis:

What is not clear, however, is whether presidents really influence the economy directly. The media have a tendency to refer to things like “The Trump Boom” or “The Obama Recovery,” but whether either of these men were actually indispensable to what happened—whether economic growth occurred independently or in spite of them—remains an open question. Presidents take credit for bull markets that begin before their terms and get blamed for crashes they had little effect in causing.

It is undeniable, however, that the economy influences elections—or more precisely, that it sets the tone for what is about to take place. These twists and turns are not necessarily associated with parties: economic booms can favor “liberal” Democrats, and deep declines can sink “free-market” Republicans. The last two episodes of market euphoria and delusion occurred under Bill Clinton and George W. Bush, respectively.

As demonstrated by the economist Robert Prechter, long-term economic rallies are correlated with the re-election of incumbents (think “stay the course”). In turn, stock market crashes and sustained downturns are predictive of incumbent loses and changes in power (think “throw the bums out”). This becomes quite pronounced in “landslide” elections. Dwight Eisenhower was re-elected overwhelmingly in 1956 right in the middle of a 15-year bull market stretching from 1940-1966. Lyndon B. Johnson achieved a similar coup in 1964, just as the market topped. Nixon was re-elected in a historic landslide in 1972 at the top of an economic recovery—only to have his presidency destroyed as the markets went into free-fall in 1974. In 1979, Jimmy Carter gave a televised speech ever since known by the moniker “malaise”; he diagnosed a country torn apart by “fragmentation and self-interest.” Reagan, on the other hand—elected as this episode of inflation and decline came to end—would be remembered by his 1984 campaign ad “Morning in America”; the commercial proudly announced the return of traditional values, but also the wealth, ambition, and confidence—and greed and arrogance—that are synonymous with “The ’80s.” Each of these episodes are indicators of “social mood,” the collective emotions that inform and undergird economic cycles. 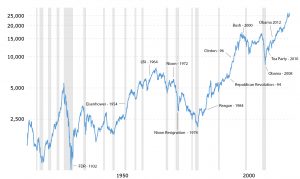 Barack Obama was at the right place at the right time—a certain luck that seems to characterize his entire life. When he took office in 2009, the Dow Jones Industrial Index was at a local nadir of 8,000. By the time of his reelection, it was at 13,000. He left office when it was approaching 20,000. The Republican refrain that Obama’s “big-spending,” “socialist” programs would destroy the economy simply fell on deaf ears.

Trump has been dealt a different hand entirely. He entered office at the tail end of a long-term bull market. And the equities boom coincided with similar euphoria in real-estate, luxury consumption, and other markets. Put simply, the “Trump economy” began long before Trump and now has nowhere to go but down. Post-election, Trump, unsurprisingly, took credit for the gains in the stock market and low unemployment rates. When the bubble pops, as it inevitably will, he will be shouldered with the blame. As of this writing, the stock market was still in the range of all-time highs, but has shown major signs that a bear market is imminent, with various corrections of two to five percent—corrections that have been led by double-digit declines in the “big tech” stocks.

Best Jobs Numbers in the history of our great Country! Many other things likewise. So why wouldn’t we win the Midterms? Dems can never do even nearly as well! Think of what will happen to your now beautiful 401-k’s!

Interestingly, unlike Presidential elections, changes of power in the Midterms are not as easily correlated to market cycles: the 1994 “Revolution” occurred during an economic recovery; the Democratic sweep of the House in 2006 came at the height of the housing and stock bubbles; in 2008, the Republicans were thrown out of Congress with the crash—then let back in two years later as the recession deepened.

In the unlikely event that a stock market downturn occurs just before the November 6th Midterms, this will reveal a darkening social mood. In our view, a bear market in stocks and real-estate will occur in the next two years. This will deeply influence the 2020 election, define its tone and what issues are paramount, and suggest that a change of party in the White House is coming.

3 thoughts on “The Midterm Flip”