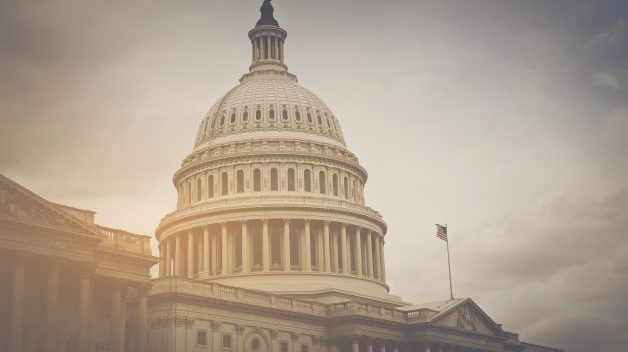 By the spring of 2018, liberal activists and journalists began talking about a “Blue Wave,” a term that became a hashtag on social media. The hope was that the Democrats would retake both House and the Senate—and perhaps instigate the demise of Donald Trump and everything he has come to represent.

While the National Policy Institute predicts that the Democrats will win the House, it is important to put this into perspective. Democratic control will be tenuous and will not approach the level of dominance that the party enjoyed across the 20th century.

Both Trump haters and supporters (including Steve Bannon) have called 2018 a “referendum on Trump.” Yet those expecting an “up/down” verdict on the past two years will be disappointed. Congressional inertia is more powerful than public opinion on presidents, policies, controversies, and scandals. 75 percent of the races are uncompetitive “slam dunks,” and we can expect incumbent Congressmen, especially members of the House, to be re-elected at a rate close to 90 percent.

A better understanding of the nature of Congressional elections requires looking at its long-term evolution.

The history of Congress in the modern era (since Franklin Roosevelt’s election in 1932) can be summed up in three words: Consistent Democratic Dominance. Indeed, for 60 years, Congress was effectively a one-party body. Between the 73rd Congress of 1933 and the “Republican Revolution” class of 1995, Democrats controlled 28 of the 31 Congresses, losing to the Republicans only briefly in 1947-49 and 1952-3 and enduring a split in 1985-86. 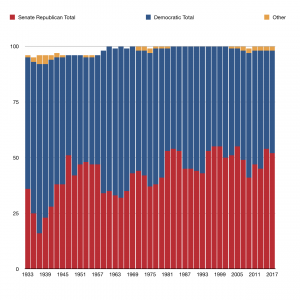 The quarter century since Republicans took the House in the 1994 Midterms can be thought of as the “Red Era.” The Republicans’ share of Congress has increased from some 25 percent in the early 1930s to over 55 percent in the past few classes. Republicans have held both Chambers seven out of twelve election cycles, and held onto to one chamber ten out of twelve. Democrats, on the other hand, were only in full command during the first half of Barack’s Obama’s first term. 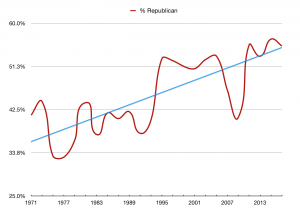 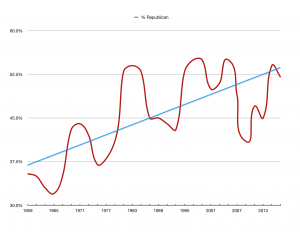 Over the past four decades, the margins of dominance in Congress (by either party) have progressively shrunk, approaching an even split. As mentioned, since realignment in the 1960s, Republicans have progressed from being a marginal “also ran” to a ruling party. But over the same stretch of time, the margins of victory for either party have approached zero.

Margins of Dominance in House and Senate 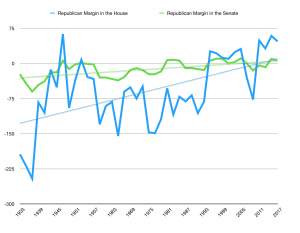 There is no reason to believe that either Republicans or Democrats will come close to the margins of 100 to 200 seats that the Democrats could rely on throughout the 20th century. Instead, margins in the dozens, or even single digits, will be the norm for the near term.

Theoretically, these tighter margins might indicate two parties that are “coming together” and likely to reach compromises. Realistically, nothing could be further from the truth. The two parties have not been this far apart in terms of politics, race, culture, and visions of the future of America since the eve of the Civil War. Tight margins spell acrimony, distrust, frustration, and they will result in legislative inaction.

One thought on “The Blue Period”