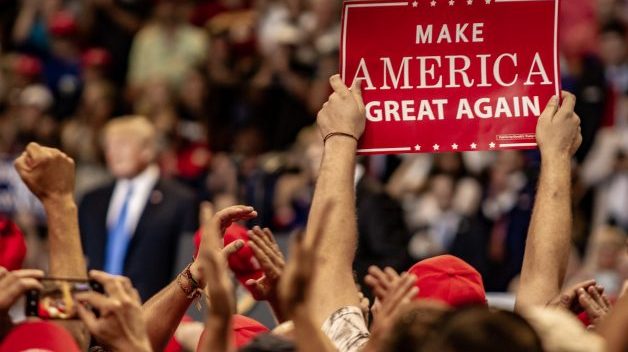 This essay is the first part of NPI’s 2018 Outlook, a broad political analysis and forecast coinciding with the 2018 Midterm elections.

On June 15, 2015, Donald J. Trump descended a gold-plated elevator at Trump Tower in New York City, with his fashion-model wife by his side, to announce an impossible bid for the Presidency of the United States. Initially, the scene was treated as farce: a mere vanity project by a man whose politically incorrect outbursts doomed him to irrelevance. Some speculated he was just doing it for the ratings.

A year and half later, Trump’s 2016 campaign would be viewed as a political watershed: an expression of latent nationalist energies within the American public, which many presumed were over and done with . . . part of an anti-system, populist backlash occurring across the globe . . . and, for most conventional commentators, a danger to all they hold dear, not to mention the legitimacy of the United States.

Donald Trump entered the scene with zero political experience but close to 100 percent household name recognition. Like Mitt Romney, Trump was a businessman and claimed to “understand the economy.” But he had become an icon in the 2000s, not as a real-estate developer, but as a celebrity from trash TV. A walking, talking meme—whose name itself implies pomp, wealth, and arrogance—Trump was, like Paris Hilton and Kim Kardashian, “famous for being famous.”

Trump’s impossible candidacy allowed him to do the impossible. He won a mutually declared war against his own party’s establishment (he was openly denounced by the GOP’s previous nominee, Mitt Romney). He weathered scandals and media fights that would have sunk most regular politicians—indeed, Trump seemed to thrive on them. Like Romney, Trump lost the popular vote by a substantial margin, but he was able to win the right constituencies for an Electoral College landslide. Trump took the Florida prize by some 100,000 votes and added Midwestern states—by razor-thin margins, we should remember—to the Republican strongholds in the South and West.

Thus President Trump entered office in January of 2017 in a highly favorable position to enact a lasting, transformative policy agenda. The Republican Party controlled the House of Representative by some 50 seats and held the Senate by a slim but decisive margin.

After some missteps early on, Trump won his share of victories—some legislative, some political, some social and economic, and many due to the luck of the draw.

The economy was in a long-term recovery. Throughout his first two years, equity and real-estate markets were up, unemployment was down, and corporations were flush with cash—buying back stock and taking on new debt with abandon. Republican-backed legislation on taxes, no doubt, fueled the euphoria.

“Obamacare”—a bugbear for the party since its passage in 2009—was effectively neutered in this aforementioned legislation, though the Party has yet to offer a coherent alternative. Trump’s appointments of Neil Gorsuch and Brett Kavanaugh delighted traditional conservative voters and will inform Supreme Court decisions for decades.

Even with a re-election bid far off, the President is able to command stadiums full of adoring, enthusiastic supporters like no other American politician, certainly like no other Republican. And they are not coming out to his rallies because of the Midterms; they’re coming out for him.

Perhaps Trump’s most miraculous achievement was winning over the Republican establishment and its centers of power, which had, up until his receiving the nomination, treated him as a usurper and buffoon. By 2017, in the words of former Speaker of the House John Boehner, “There is no Republican Party. There’s a Trump party. The Republican Party is kind of taking a nap somewhere.”

The Robert Mueller investigation still hangs like a Damoclean sword over Trump’s head, but the days when serious observers like former Reagan official David Stockman could plausibly predict Trump would not survive through the end of 2017, and then not through the end of 2018, are a thing of the past. Overall, Trump’s presidency is stable, a notable achievement given how “impossible” it always was.

Stability, achieved. But Trump’s policy agenda has not quite lived up to the “nationalist” and “populist” themes he sounded on the campaign trail. Promises of reviving the industrial manufacturing base were replaced with tax cuts for the “1%” and boasts about new highs in the Dow Jones Industrial average. In his first term, American trade imbalances ballooned to all-time highs, belying any promise of “re-industrialization” or a reordering of the global economic system. Public debt increased at an alarming rate as well, despite the fact this was something Trump had been warning about since the 1980s. The North America Free Trade Agreement (NAFTA) was replaced with a deal that differs only marginally from its predecessor. Trump’s strident antiwar message on the campaign trail gave way to an explicit call for the status quo in Afghanistan, strategic missile strikes against Syria, renewed sanctions against Russia, and saber rattling against Iran. Major immigration reform legislation was proposed in the fall of 2017, but languished. The Wall—the centerpiece of his campaign rallies to this day—is nowhere to be seen.

Putting aside the scandals, the outlandish tweets, the accusations of Russian conspiracies, and the adoring fans in red hats, the actual Trump presidency has been business as usual for the GOP. Indeed, policy-wise, Trump’s time in office hasn’t differed terribly from what one might have expected from Jeb Bush.

The National Policy Institute projects that in the 2018 Midterm elections, Republicans will lose control of the House of Representatives by a margin of 15 seats. They will hold on to the Senate, however. We predict that the GOP will increase its edge by one seat.

This kind of “split” Congress will be a feature of politics for the coming four to eight years—limiting both parties’ abilities to enact legislation and raising questions in the public’s mind about America’s political structure.

Donald Trump’s policy agenda will be stalled. Indeed, he may begin to feel like a “lame duck” in his first term.

Trump’s prospects for re-election will certainly not be helped by all this, but his path to victory has not changed much from 2016. As as 2020 election cycle emerges, the ailing economy (and not immigration or “Russian collaboration”) will be the issue most hotly debated. Trump has taken credit for an upswing in the markets; he will soon be blamed for their reversals.

The Democrats’ dream of removing Trump from office before 2020 will remain just that—a dream. Impeachment in the House—which requires a simple majority—is possible, though unlikely. A conviction and removal by the Senate—which requires a two-thirds majority—is simply not going to happen, barring dramatic new revelations from the Mueller investigation.

We have seen this before. The 2006 Midterms, in which the Democrats seized power in the House, revealed a broad discontent with George W. Bush—his foreign policy and governing style, in particular—and foretold the crushing defeat of John McCain in the next cycle. Two years later, another “impossible” candidate, Barack Obama, challenged the establishment and entered office with control of both Chambers. His enormous political capital was spent on healthcare reform in his first year, legislation that ultimately fell to the curse of the “grand compromise”: as opposed to pleasing everyone, it pleased no one. Republican rage at “Obamacare” fueled the Tea Party movement, which helped the GOP regain control of the House in 2010. The remainder of Obama’s time was defined by listlessness and a lack of memorable accomplishments. Obama was still able to energize the Republican base, but not due to any major action or policy.

Trump may soon experience the same fate. He will drive liberals into fits, enthuse his base of loyalists, and serve up endless fodder for cable-new debates. He will ultimately be remembered, however, as a colorful, late episode in White America’s long-term decline. As explored in the final section of this report, the window for a Republican-led immigration-reform effort—what would seem to express the very essence of 2016 “Trumpism”—is closing fast, if it is not already shut.