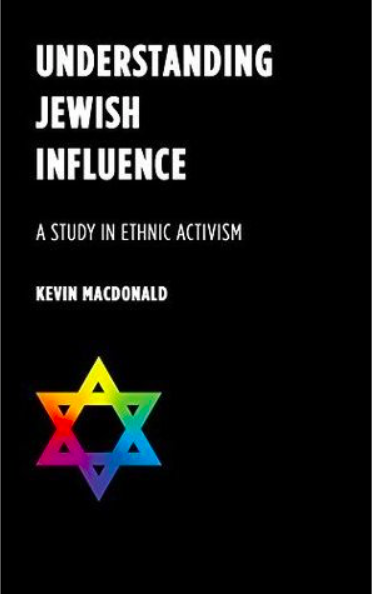 The essay is the introduction to Kevin MacDonald’s Understanding Jewish Influence (2004).

Kevin MacDonald, of course, is the author of what is probably the most exhaustive study of the Jewish people, religion, and culture ever written—a trilogy that consists of volumes entitled A People That Shall Dwell Alone (1994), Separation and Its Discontents, and The Culture of Critique (both 1998). Originally published by the scientific firm Praeger and expensively priced, the volumes quickly became all but inaccessible but now have been reprinted in paperback editions and are available through Dr. MacDonald’s website, as well as through major book distributors.

As happens to anyone who discusses Jewish influence openly and honestly, Dr. MacDonald was soon accused of “anti-Semitism,” and efforts were made to end his academic career, prevent him from publishing, and smear him as a scholar and a person. So far these efforts have been unsuccessful. He continues to hold his chair as Professor of Psychology at the University of California at Long Beach and to publish in his field of evolutionary psychology, in which he is a widely recognized authority.

MacDonald brings the perspective of his discipline to his examination of Jewish influence. The distinctive traits of Jewish culture and personality that he documents exhaustively throughout history from both Jewish and non-Jewish sources are, in his theory, the product of the evolutionary adaptation of the Jewish people as a group. In this respect, MacDonald’s thesis bears a striking resemblance to that of Sir Arthur Keith, whose “group selection” theory of human evolution also included a study of the Jews as a group adapted by evolutionary forces to display characteristics of strong group identity and solidarity, traits that Keith described as reflecting a “code of amity” toward members of the group and a “code of enmity” towards outsiders. This “dual code” is strangely reminiscent of what the Roman historian Tacitus wrote about the Jews of his era, as MacDonald quotes him: “Among themselves they are inflexibly honest and ever ready to show compassion, though they regard the rest of mankind with all the hatred of enemies.”

There is, of course, nothing “anti-Semitic” about such a theory or its documentation. “Anti-Semitism,” in so far as it has any meaning, can refer only to hatred of or a desire to harm Jews, and there is nothing in what MacDonald has said or written that even approaches fitting that definition. The only basis for claiming it is “anti-Semitic” is to so broaden the meaning of the term as to include any attribution to Jews of characteristics that are not uniformly positive or to make any generalizations about them at all. For many who hurl the charge, that seems to be more than enough.

But of course, as with many others who have discussed (or tried to discuss or even to mention) the question of Jewish influence frankly—Pat Buchanan, Joe Sobran, Congressmen Paul Findley or James Moran, and more recently Gen. Anthony Zinni, Senator Ernest Hollings, or Ralph Nader—any effort to argue against the charge is fruitless. The accusation of “anti-Semitism,” much like those of “racism,” “xenophobia,” “sexism,” “homophobia,” etc., is essentially a power trip, an effort to avoid and destroy discussion of substantive issues and deflect it onto an ad hominem level that is impossible to deny or defend against. How do you “prove” you’re not whatever bad name you have just been called? Any denial or defense is at once met with the charge that it “just doesn’t go far enough.” Of course not; it never does and never can. That’s why the charge is so powerful and so dangerous, and those who hurl it are well aware of that. But in terms of their merits, these kinds of accusations don’t even count. Invocations of such “isms” and “phobias” are invariably signs that those who hurl them have little of substance to say. As Peter Brimelow has noted, a “racist” is “anyone who is winning an argument with a liberal,” or for that matter a libertarian or, on some issues, a conservative. Much the same is true of most of those who are accused of being “anti-Semites.”

In the last couple of years, the question of Jewish influence has popped into the mainstream media as it probably never has before in this country in the last century. First, as Dr. MacDonald discusses in some detail in his third essay in this book, it appeared in the issue of “who got us into Iraq?” It became clear even before hostilities erupted in April 2003 that a small group of policy-makers who were mainly Jewish and were closely connected to other Jewish publicists in the media were doing all they could to induce the Bush administration and the nation to embark on a war with Iraq, if not with other Arab states that they perceived as hostile to the state of Israel. To be sure, there were non-Jews involved in these activities—President Bush, Vice President Cheney, and Defense Secretary Rumsfeld not least, as well as any number of non-Jewish war hawks and professional conservatives like Rush Limbaugh—but the principal actors pressing for war from almost the beginning of the Bush administration were Jews—Deputy Defense Secretary Paul Wolfowitz (named by the Jerusalem Post as “Man of the Year” for his role in instigating the Iraq war), Richard Perle, Douglas Feith, and a number of others inside the Pentagon or other government departments and agencies, as well as such well-known Jewish commentators as Norman Podhoretz, Bill Kristol, Charles Krauthammer, Michael Ledeen, David Frum, and Josh Muravchik.

Moreover, article after article documenting their influence and their connections and their likely motivations—attachment to Israel and its interests in the Middle East—ap-peared in the mainstream, conservative, and liberal media and in articles not infrequently written by Jewish writers. As a result, the level of awareness of Jewish influence on public policy among many Americans has probably been greater in the last couple of years than ever before.

But on the heels of the Iraq war, there came yet another controversy that again highlighted Jewish influence, this time in popular culture, in the attacks on Mel Gibson’s movie The Passion of the Christ. The controversy effectively began with attacks on the film by Abraham Foxman of the Anti-Defamation League of B’nai B’rith and reached a crescendo soon after the movie made its debut. Jewish reviewers such as Frank Rich of the New York Times wrote that the film was “unambiguously contrived to vilify Jews”[1]; Leon Wieseltier in The New Republic claimed that Gibson “has chosen to give millions of people the impression that Jews are culpable for the death of Jesus,”[2] and Jamie Bernhard opened her review in the New York Daily News with the statement that “Mel Gibson’s The Passion of the Christ is the most virulently anti-Semitic movie made since the German propaganda films of World War II.”[3] Nevertheless, despite receiving more hostile publicity than any other mainstream movie in history, The Passion of the Christ quickly generated record audiences and record revenues for its producer and director. The attack on the film failed, despite the ability of its mainly Jewish enemies to orchestrate an immense amount of hostility to and outright vilification of it and Gibson himself.

MacDonald only briefly mentions the Gibson controversy, but virtually everything about it fits his model of “Jewish influence” and his theory of the “culture of critique” that Jews have constructed. What MacDonald offers largely explains why so many Jews have reacted so strongly to any perceived threat, why they tend to perceive even innocuous remarks and actions as threatening, and how they coordinate and mobilize financial, political, and public opinion resources to crush what they perceive.

What his theory does not explain is why non-Jews put up with it and go along with it. What is clear in the two cases just mentioned, the Iraq war and the Gibson controversy, is that Jewish influence amounts to very little if those over whom it is wielded recognize it and reject it. Jewish policy-wonks may have instigated the Iraq war, but their role in doing so and their resort to what certainly were distortions and may have been outright fabrications of intelligence on “weapons of mass destruction” and supposed Iraqi links with international terrorism soon became notorious and effectively discredited those who concocted them. The Gibson assault, for all the massive financial and media resources deployed, proved to be a total failure, as millions of Americans flocked to theaters to see the movie and the film grossed hundreds of millions of dollars in revenue.

What is clear in the aftermath of these episodes is that “Jewish power” exists at all only because the gentiles who are supposedly enslaved to it either fail to see it or refuse to resist it. At the slightest breath of air and light, it collapses—which is why anyone who talks about it is so quickly damned and silenced as an “anti-Semite.’ But what is not clear is why gentiles tolerate Jewish power and Jewish influence at all.

Dr. MacDonald should definitely turn his attentions and energies to that question. In the meantime, what he has already accomplished is far more than most others accomplish in the course of a lifetime. Whether we embrace his entire theory or not, what we can learn from his scholarship and thought rewards the effort of assimilating it. The essays he offers in this book are a good place to begin doing so.